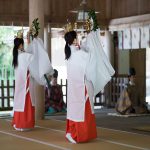 Miho Shrine is located in the small fishing village of Mihonoseki. The main deity enshrined here is Kotoshiro-nushi(known as Ebisu), the son of Okuninushi who is the main deity of Izumo Taisha Grand Shrine.
Ebisu who is one of the seven Lucky Gods is the god for fishermen and is also the god of good fortune

Miho Shrine is the head shrine of the thousands of dedicated to Ebisu in Japan. 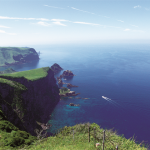 Oki Islands is an archipelago in the Sea of Japan located 40-80km north of the Coast of Shimane Prefecture.
It is a group of four inhabited islands and 180 uninhabited islands.
Oki Islands are included in Daisen-Oki National Park and were designated as a UNESCO Global Geopark in 2014. 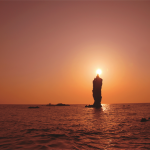 Candle Rock is located 500 meters off the northwest coast from Dogo, which is the largest island of Oki Islands.
Oki Islands are designated as Daisen-Oki national park and UNESCO Global Geopark with full of nature. 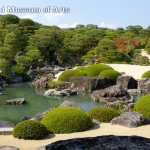 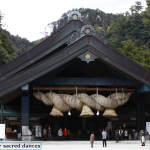 Izumo Taisha Grand Shrine is located in Izumo city and known as one of the most important and the oldest shrine in Japan.
The deity enshrined here is Okuninushi no mikoto, the creator of Japan and deity of Good relationship 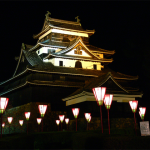 There are only 12 original castles are remaining and 5 of which are designated as national treasure including Matsue castle.
This castle was built in 1611 by the founder of the Matsue domain Yoshiharu Horio.